MC Oluomo reveals the best inheritance he gave to his children

Former NURTW Chairman Musiliu Akinsanya, well known as MC Oluomo, has disclosed the best inheritance he has left to his children.

MC Oluomo took to Instagram to post a video with two of his children who are studying in the United States, revealing that the best inheritance he has given his children is spending time with them.

MC Oluomo believes that a parent’s best inheritance is a few minutes of his time each day.

Using himself as an example, he described how he returned to the United States with his daughters after the holiday and attended his daughter’s graduation.

The pleasure of MC Oluomo knew no bounds as his daughter, Adijat Amoke Akinsanya, received a Bachelor’s degree in Psychology, according to Kemi Filani news.

Her pleased father took to Instagram to congratulate his daughter on her accomplishment.

He thanked his daughter for making him proud and also thanked God for his daughter’s higher education being completed.

“Alhamdulilah,” wrote MC Oluomo. Your life is your story, and the adventure that awaits you is the road toward realizing your purpose and potential. Adijat Amoke Akinsanya, my daughter, graduated from Albany State University. She earned a degree in Psychology. As a father, I am truly delighted and proud. I’m also thankful to God for completing her higher education. May we all enjoy the fruits of our labor, and may Allah continue to guide our children. Amin. Congratulations once more, Adijat Amoke Akinsanya, my lovely daughter. 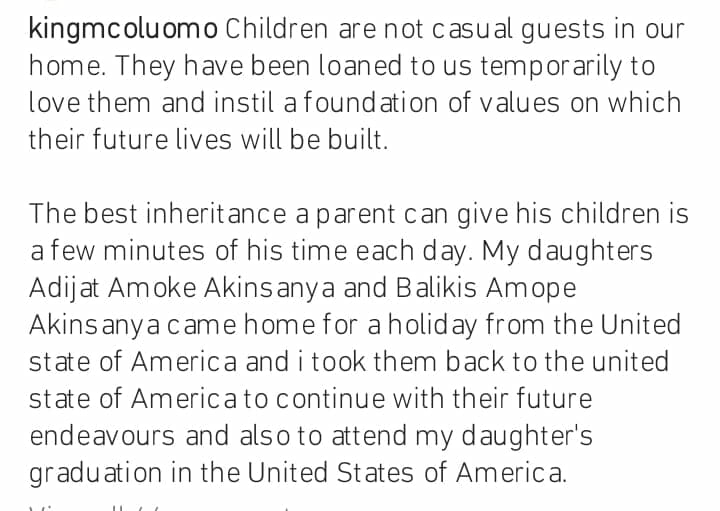